Superman: Odds and Ends of 75 Years 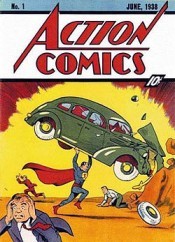 On April 18, 1938 a comic book was published featuring a character created by Jerry Siegel and Joe Shuster, a couple of young men from Cleveland. This book and the characters within changed popular culture as we know it, ushering in the advent of superheroes and the comics that told their stories.

75 years ago, and Superman is still a part of the world’s imagination today. Though he has gone through many changes in that time, the larger than life hero and what he stands for is still popular.

In June, the film Man of Steel hits theaters with Henry Cavill in the role, adding another chapter to this larger than life mythos.

Even though I haven’t seen the new film, based on the things I’ve seen in the trailer and what I know of Superman’s storied 75 year long past, I can tell you what things we probably won’t see in the film and why. This is a brief look at some of those things.

Clark Kent discovered his powers while in high school, but was cautioned to use them, not for his own benefit, but the greater good. The scene of teenaged Clark punting the football to the sky and racing a train home in 1977’s Superman with Christopher Reeve is a good illustration of this. In the latest trailer, we see him rescuing a bus full of kids.

Obviously he has the ability to do amazing things even at a young age, but suiting up and saving the day? Not until he was older.

We all know green Kryptonite can kill the Man of Steel. But there are other kinds of kryptonite. For example, red Kryptonite has varied effects on him, ranging from from supercharged powers to lost inhibitions to body swapping. Gold Kryptonite strips Superman of all his powers. White Kryptonite kills all plants. Pink Kryptonite turns Superman gay (I wish I was making that up).

Now, there are some rumors that a black form of Kryptonite shown in the movie has been spotted online, but of course, until it comes out it remains to be seen what it really is and what effects, if any, this Kryptonite has. More than likely it won’t be any of the bizarre outcomes mentioned above. 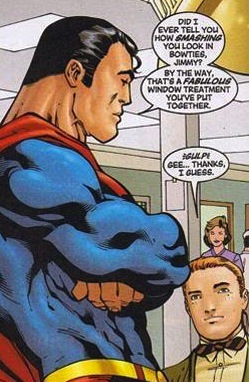 A white puppy and pet of the toddler Kal-El, Krypto was launched in a rocket by Superman’s father Jor-El as a test subject for the rocket that eventually carried his son to Earth. This test rocket was knocked off course during the test and landed years later on Earth, while Clark Kent was acting as Superboy. In later stories, different dogs made their appearances with the name Krypto, from fierce Kryptonian superdogs to white mutts.

Beppo, a monkey, was another Kryptonian test-animal, but he stowed away on the rocket that saved the young Superman. After living in a jungle for a time, the monkey surfaced in a very young Clark Kent’s life to cause all kinds of shenanigans in Smallville as only monkeys can (minus super-poo throwing).

Both Krypto and Beppo served as members of the Legion of Super-Pets in the 31st Century. Yes, a super-pet organization in the future.

Krypto has enjoyed some popularity in recent times, with even a kids show in the last few years and comic book appearances. Beppo, on the other hand, was written out of Superman’s stories a couple decades ago, but has been featured recently in children’s books with different super-pets.

Given these animals first appeared when Clark Kent was acting as Superboy, they probably won’t be in the film, if ever. Animal heroes can skew toward cutesy and the movie in that trailer above doesn't strike me as cutesy, at all. Why would this even need to be there? Definitely a bizarre artifact of the old dailies that ran in the late 1930's.

Whatever portrayal they give Superman, there's no denying he is a cultural icon, standing for the good things we all want to see in ourselves and the world. Truth. Justice. Standing up for the Little Guy. A Hero. Even with the bizarre and sometimes inexplicable things the comic has produced, separating the ideals of the myth from the complicated history of the character is not difficult, and it’s probably why the character and the stories endure for so long.

Superman and all related characters are copyright DC Comics and the depictions here are intended as fair use.

Share this article!
Tell us what you think!
Like us on Facebook Follow us on Twitter Follow us on Instagram
Hey, it's Kassie with the Community Team!
Can you take 6 minutes to answer a quick survey about your experience on Talenthouse?
20 creators will be randomly selected to receive a $25 gift card to Amazon!
Sure, I'm in!
Not right now Don't ask again