Linkin Park Winner Dika Toolkit's Made Something for You to See

Talenthouse has a huge international scope and it's a thrill for me to be in contact with folks half a world away. It shows the impact and of creativity, whether it's a band, a designer or photographer or any other artist.

Dika Toolkit is one of those artists. From Indonesia, he won the Creative Invite to design a shirt inspired by their latest single, Castle of Glass. His design will be sold online and on tour by Linkin Park. Dika has a distinctive, painterly style that captures chaos, strength, and elegance at the same time. We talked a bit over email and here's what he had to say about himself.

TH: Your graphic has a beautiful design! Do you have a background in design or fine art?
Dika: Thank you. Yes, I do. I took graphic design in college.

When you set out to begin a project, what do you try to fulfill for subject?
Dika: Usually I make a few rough sketches first to give me a specific direction for the next step. After I have a clear image to draw, I begin add elements on it, such as color tones or typography. Given this image won for a band and their song, does music play a part of your design process? Linkin Park’s music?
Dika: Yes, it does. Music is pretty much my best friend when I'm drawing and Linkin Park's music has been giving me so much great inspiration, especially for my creative side.

What was your inspiration for the image itself?
Dika: Well my inspiration was the band itself. I've been listening to Linkin Park since they released their debut album, so when I decided to enter the contest, I already knew the mood and style that would fit for Linkin Park as a rock band. For the rest I was just having fun! 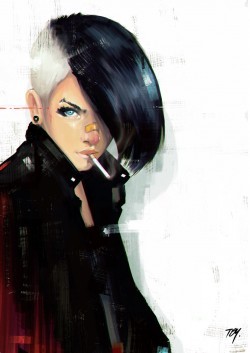 Are you currently working on any projects?
Dika: Yes, currently I'm making an album cover artwork for a local band here in Indonesia. :)

Do you do a lot of music related projects? Like posters or album covers?
Dika: Not yet really, only a few, hopefully I get more projects in the future! :)

Is there another band you would like to work with in the future, since you seem to have some experience with that?
Dika: Yes, I love Paramore. That would be awesome if I could work with them! But still my dream is to make a cover for a Linkin Park album.. hehe, well any band/singer though!