Grammy Award-winning alternative rock group The Dave Matthews Band invited artists and designers to submit an original design for the band to feature in the merchandise line for DMB's summer tour. DMB asked that the designs be inspired by the band, their music, and/or the community. Ben Whitesell won this contest with his colorful poster: Of his design, Ben says, "My idea is for a poster that allows fans to build their very own caravan. I included numerous easter eggs on the van's exterior including names of the band's studio albums, a bumper sticker for each of the summer tour cities, and the band makes an cameo through their instruments." He also explains that "I have this set up as a 16" x 20" print poster. It will actually assemble into a very large caravan that looks great 3-dimensional." Cool idea, Ben!

Not only will Ben's design be featured in DMB's summer tour merchandise line and promoted on the band's official online store, he will also receive two VIP tickets to a Dave Matthews concert of his choice, exposure for his submission on DMB's social media channels, and $1,000. Congratulations Ben!

Dave Matthews Band were so impressed with the quality of submissions that they have decided to award an additional finalist, who will receive $350 and exposure through the band's social media channels. Michele Guerriero  takes that honor with this summery design. 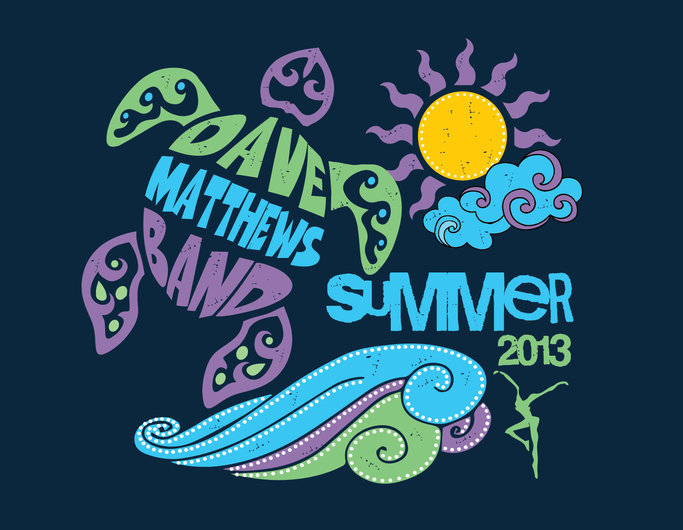 Michele says "I am a huge fan of Dave Matthews. I wanted to do something fun and colorful for the upcoming summer tour." Michele will receive exposure for her submission on the DMB Facebook page as well as $500. Good job, Michele!

This Creative Invite has been a blast! Thank you for submitting your designs.

You can view the rest of the submissions here.