What's the difference between a film and a movie? What does directing a film have in common with eating a whale? Let director David Fincher, the man behind The Curious Case of Benjamin Button and The Social Network, enlighten you with these five tips about crafting elite (and less elite) cinema. And don't worry - the tips are far less intimidating than the rules of Fight Club.

1. Call your own shots

"There's nothing worse than hearing somebody say, 'Oh, you made that movie? I thought that movie sucked,' and you have to agree with them," Fincher said on why he's so hands-on in making decisions. 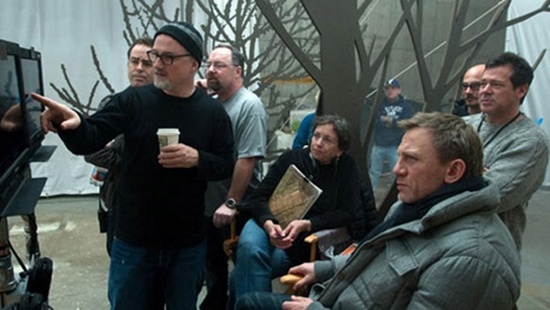 Fincher on set with actor Daniel Craig in The Girl with the Dragon Tattoo.

2. Give it your best, but stay realistic

'Do the best you can, try to live it down,' that's my motto. Just literally give it everything you got, and then know that it's never going to turn out the way you want it to, and let it go, and hope that it doesn't return. Because you want it to be better than it can ever turn out. Absolutely, 1000 percent, I believe this: whenever a director friend of mine says, 'Man, the dailies look amazing!' ... I actually believe that anybody, who thinks that their dailies look amazing doesn't understand the power of cinema; doesn't understand what cinema is capable of."

Film is a collaborative process. It's dependent on everything falling into place the way it's supposed to - no one person, even the director, can exercise complete control over this. All they can ever do is put in their best work and keep trucking.

Fincher looks at the set up of each scene with each eye individually - the left, for composition and the right for focus and technical specs.

That said, make sure your movie actually contains a semblance of a plot. A series of scenes where characters sit around and reflect on the meaning of life might as well be a documentary.

At the beginning of the filmmaking process, your project looks like a heck of a giant to tackle. In the middle it's hard to step back and imagine what the finished product will look like.

"How do you eat a whale? One bite at a time. How do you shoot a 150-day movie? You shoot it one day at a time," said Fincher. This advice is applicable across the board in nearly all art forms. Break your projects down into smaller tasks and don't let the gravity of any situation overwhelm you.